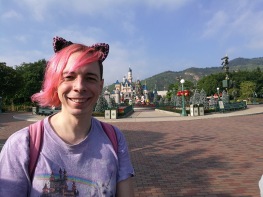 Editor’s note: The Institute of Archaeology’s Technical Service Manager, Alex Uhde, was presented with the challenge of retrieving and preserving material at risk of being lost, much as we strive to do as conservators. Alex kindly wrote up the technical process and experience for us, as an insight into the possibilities and realities for conservation of modern digitally supported culture, in which the material itself may be less tangibly linked to the information it supports than we are used to.

A member of academic staff presented me with an unreadable USB flash drive and asked me to salvage the data. Although the USB controller was detected by the computer, the data it housed did not appear. This suggested that the odds of data recovery were low, but I continued as the data on the drive was of high importance.

First, I removed the plastic shell of the drive and found nothing of immediate concern at first glance. On closer inspection, I found a small spot of corrosion connecting two pins on the flash memory chip. This I removed with the tip of my screwdriver, and then connected the drive again, only to receive the same unsuccessful result.

At this point, I decided that there were only two likely remaining possibilities: complete failure of the flash memory chip (or a portion of the circuit connecting it to the controller), or a cold/cracked solder joint.

I made several more attempts to connect the drive, and on one attempt I did get the LED to flash and the name of the drive – though none of its contents – to show up. This occurred whilst tightly squeezing the flash memory chip. I could not replicate this in additional attempts, but it allowed me to have confidence that all components were functional and there was a solder problem.

Based on this, I decided to attempt a risky, and usually temporary, repair known as a ‘reflow’ to retrieve the data from the drive. This repair involves heating the board to a high temperature to slightly melt the solder and fix any broken or cracked connections. We do not have a heat gun in the IT office, so I set out to search the building for one. Dean Sully from the Conservation Lab kindly agreed not only to the use of a heat gun, but to perform the reflow himself. I explained the principle of the reflow process and the desired result.

Dean heated the board until some of the printing and surface coatings started to burn off. Paying especially close attention to the two sets of connecting pins on the flash memory chip, I used a glass bristle brush to gently remove excess soot and debris from around the most sensitive connections before connecting the drive to a computer. Unlike in previous attempts, it was instantly recognised and the data could be fully recovered from the drive. The drive operated as normal.

A copy was taken of the data, as the repair is not expected to last long term due to the on-going presence of the underlying causes of failure and the removal of the drive’s protective coatings. The data, however, was successfully preserved and the drive, sans casing, returned to the owner.