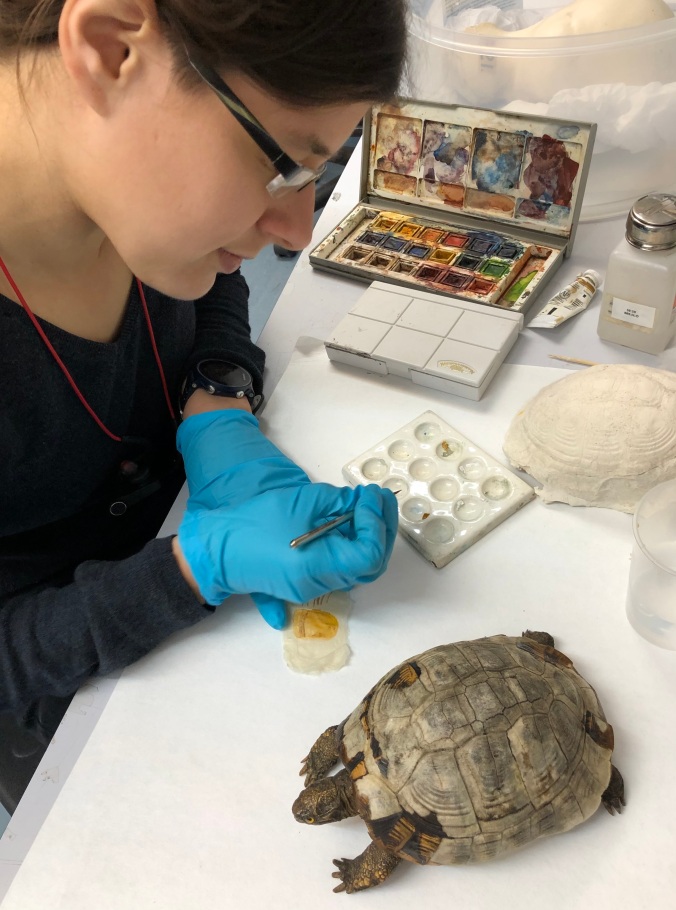 Katarina (Katy) Kaspari is a first-year student in the MSc Conservation for Museums and Archaeology programme at the Institute of Archaeology. Her interest in wildlife, biology, and chemistry led to an exploration in taxidermy that started at the Field Museum in Chicago and continues today. As a form of conservation of organic materials, taxidermy is an important area within the field of conservation. Here, Katy talks about her current treatment of a tortoise from the Grant Museum of Zoology collections. (Text by Amanda Imai)

Why is the conservation of taxidermy objects interesting to you?
I’ve always been really fascinated by the diversity of animal life on our planet from a young age. My favourite TV show as a kid was Really Wild Animals and my favourite place to go on school holidays was Lincoln Park Zoo to see live animals or to the Field Museum to see the taxidermy animals. When I was a kid I wanted to be a zookeeper or a marine biologist, but somehow along the way I ended up in conservation! I tried taxidermy for the first time in 2013 out of curiosity and found it to be a really interesting way to study an animal up close, but also to bring an animal back to life, marrying my interest in science and art really well (which is why I ended up in conservation as well!) When I worked in the bird prep lab at the Field Museum, I was amazed that I could be so close to birds that I had never even seen up close, and some of which I’d never even seen in a zoo, like penguins, cranes, an ostrich, multiple different species of owl, and, my favourite, a red-shoulder hawk. I think conserving taxidermy is so important because so many taxidermy specimens would be illegal to collect today, and for extinct and endangered species, taxidermy is one of the best records we have of what an animal looked like in life.

Tell us about the history of this object.
This tortoise comes from the collections of the Grant Museum of Zoology at UCL. The age and provenance of the tortoise are not listed in the catalogue, although it came to the Grant Museum from the Imperial College Zoology Collection.

How does your treatment of this object differ from previous treatments?
This is the first reptile that I’ve worked with and will be the first taxidermy object that I’ve treated on my own. Prior to this I have taxidermied birds and mammals and have prepared a number of bird study skins, both of which have their own unique challenges different from conserving a taxidermy specimen.

What sort of animal and sex is Sandy?
“Sandy” is an Eastern Hermann’s tortoise (Testudo hermanni boettgeri). Based on the size and morphology of the carapace (shell), Sandy is likely to be an adult female. This is based off what I read here (https://www.tortoisesupply.com/SexingYourTortoises), but I’m reasonably confident Sandy is female.

What did you discover from the X-ray images (below)?
From the X-rays I was able to tell that the entire skeleton is still inside the tortoise, as well as 7 wires – one in each rear foot, two in the tail, one extending from each front foot to the tail and one from head to tail.

What analysis and treatment needs to be done?
The biggest damage to the tortoise is the significant loss of the keratin scutes (scales) on the shell. Of the 50 scutes that were originally present on the tortoise, only 5 complete scutes remain, while fragments of 24 others remain in place, which means that 21 scutes are missing entirely. As the purpose of taxidermy is to give the illusion of an animal in suspended animation for all time, the sensory aspects of taxidermy specimens are of great importance. The loss also detracts from the functional and evidentiary value of this tortoise as a teaching specimen, as the lack of scutes limits the ability of this tortoise to be compared with others of the same species, which is highly important as a specimen in a comparative zoology collection. Treatment will focus on re-creating new scutes for the tortoise, moulded in Steramould moulding compound and will likely be formed in painted Japanese tissue paper to replicate both the colour and texture of the scutes.

(Acknowledgements: I thank Emmy Kingham at the Grant Museum of Zoology and Anastasia van Gaver at the Cambridge Zoology Museum for their suggestions of materials to use in this process.)

Why did you name her Sandy?
Initially, I wasn’t sure if Sandy was male or female, so I wanted a unisex name. Truthfully, I just went to behindthename.com/random and kept clicking random name until I found one that I liked. Sandy seemed like a good name for a tortoise.
——————————- 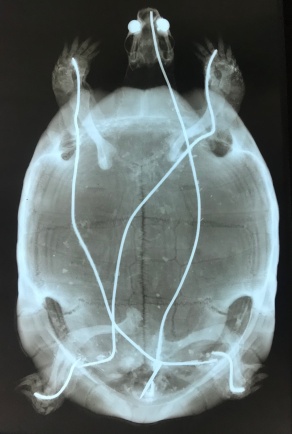 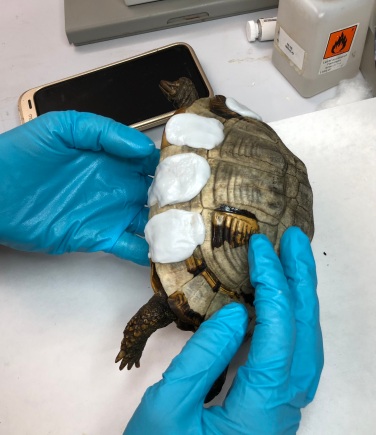