Carla Russo is a first-year MSc student from Argentina. Her background is in Economics and Finance before eventually following her call and getting a degree in Classical Archaeology. She is very interested in cultural heritage and archaeological material, which led to her pursue of the MSc degree in Conservation for Archaeology and Museums at UCL. (Text by Carla Russo)

In January of 2019 fragments of copper-alloy armour were found via metal detector in southeast Suffolk (figure 1-2). The bronze fragments were reported to the Suffolk County Council Archaeological Service, which carried out an excavation of the site with the finders and retrieved the fragments. Following conservation treatment, the objects will be donated to a public institution of the landowner and finder’s choice. 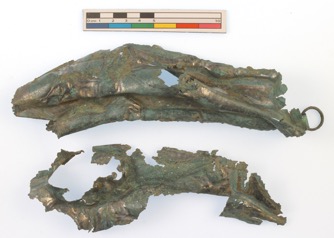 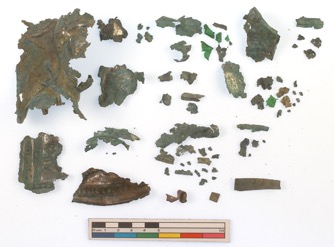 When they arrived at the conservation laboratory at UCL, the fragments were covered in soil and it was not known how many pieces there were in total (figure 3-5). The fragments were bent and scratched in multiple areas, presumably as they were found unstratified in the plough soil, having been disturbed from their context by agriculture. All the pieces were micro-excavated carefully and documented, as this was a fresh archaeological discovery. The fragments were in need of first aid conservation, meaning that they had to be retrieved from the soil, cleaned and stabilized (figure 6-7). 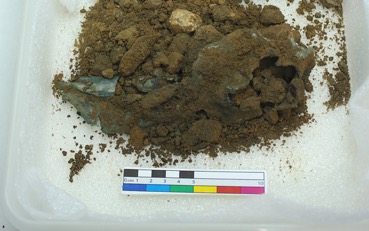 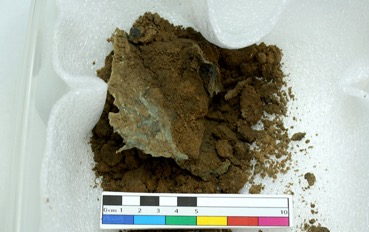 There were three large fragments which had depictions of a male torso holding a club, a head and a lion’s face, the combined pieces being a representation of Hercules. It was probably from a highly decorated piece of armour, perhaps part of a chamfron that protected a cavalry horse’s head. This is a very unusual item find in Britain. 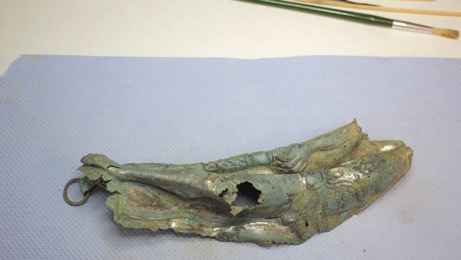 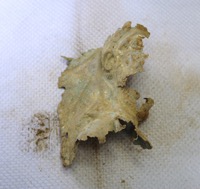 The pieces were cleaned using a variety of tools, including brushes and cotton swabs to ensure all the dirt and corrosion was removed successfully (figure 8).

The object was returned to Suffolk County Council Archaeological Service, where future work on the fragments includes illustration and potentially photogrammetry, to reconstruct the object digitally, and 3D printing of some of the pieces. 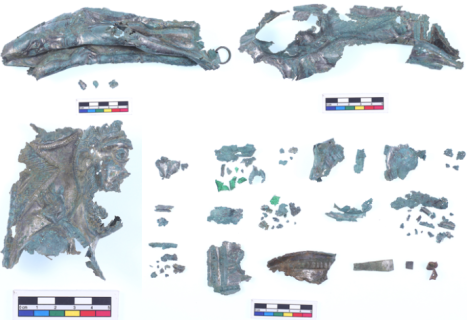 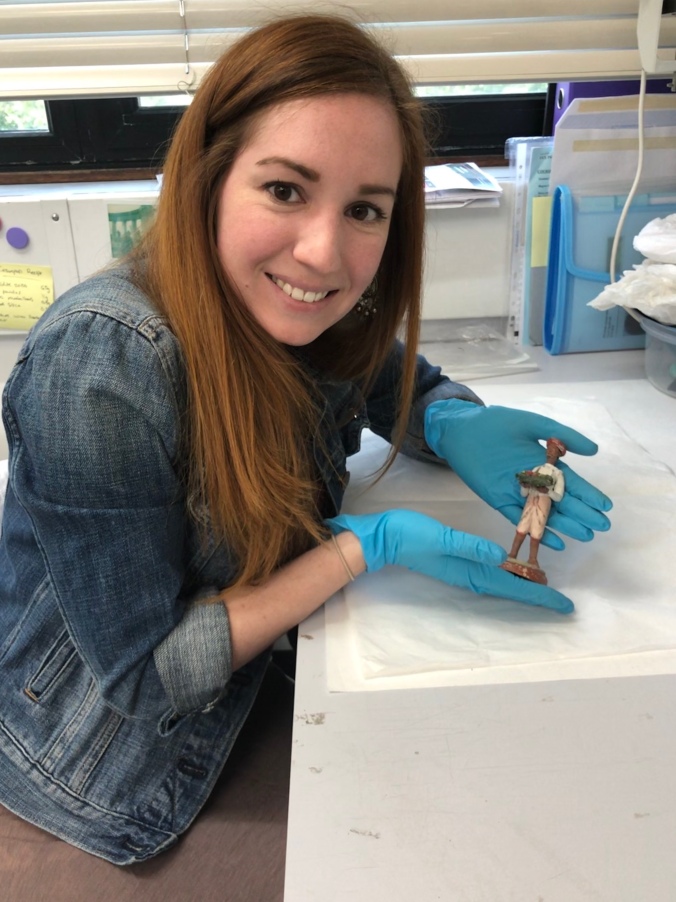 Jenna Belle Bittenbender is a first-year MSc student from Florida, USA, ‘the land of sunshine and oranges!’ Her academic background is in Classical Studies, Archaeology, and Conservation. She is deeply interested in the protection of cultural heritage, which eventually led her to pursue an MSc in Conservation for Museums and Archaeology at the Institute of Archaeology.

Dark heritage, which refers to heritage that concerns human barbarism, suffering, atrocity, disaster, and cruelty, among others, is an essential part of the study of conservation theory and practice. In this interview, Jenna Belle talks about a figurine that she recently treated of an Indian manservant. It was created in India toward the end of the British Empire’s era of colonial expansion, brought to the UK, and attests to several issues that fall within the realm of dark heritage. (Text by Amanda Imai)

What significance does this figurine have to its owner?
The figurine is a family heirloom. During the period of British colonial occupation of India, the owner’s family member acquired a sizable collection of these figurines, which were passed down to younger generations. The figurine was badly fragmented and had signs or previous repair. I should say that the object has a great deal of sentimental value to the owner.

In dealing with an object that represents part of a colonial narrative, what were some of the inner negotiations that you had with yourself during the decision-making process of this treatment?
I wanted my treatment to represent the object the way it was initially created, but in my reporting, I documented the colonial history of the object. It was really important to me that his colonial origins not be lost or obscured.

Do you think this object can be classified as dark heritage?
As my research has shown me, there are many different definitions and classifications of dark heritage. It does strike me as problematic that the assemblages were collected during a period of colonial control and that they—meaning my figurine and others like them— depict indigenous peoples in what appear to be subservient roles. I can see how this would cause discomfort to many.

Describe your treatment process for the object.
I began by stabilising the supportive wires inside the object. These were loose and caused the figuring to wobble, which in turn caused crumbling to the unbaked clay. So, to begin with, I stabilised those supports. I consolidated loose fragments of the figurine. Then I began cleaning the figurine. I dry-cleaned the surface and removed the adhesive from previous repairs. Then I re-joined the fragments and consolidated the figure’s painted surface. Lastly, I reconstructed a large portion of his legs, which had been completely lost.

What has been the most interesting part of working on this object?
I really enjoyed stabilising the supports of the figure. I wasn’t sure if I would be able to make him stand upright. I thought that even after being treated he may forever be relegated to laying in a box. Strengthening his supports and allowing him to stand upright feels like I have restored some dignity to this figure. 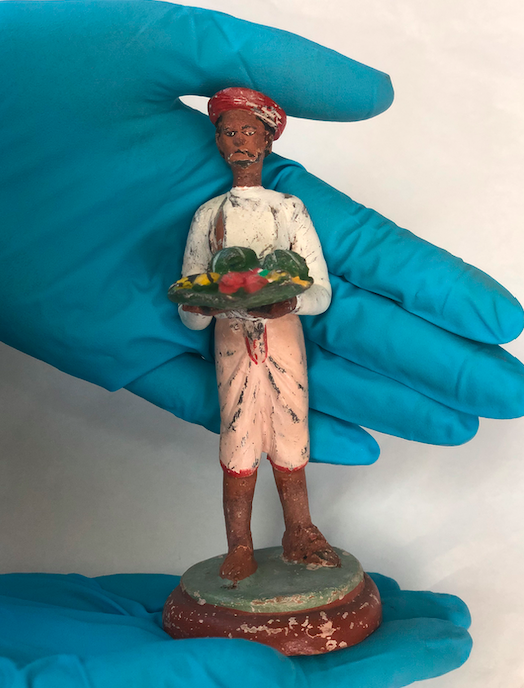 Part two of our #featurefriday this week is the reason last week got missed! This is an image taken of a calcium deposit under the Scanning Electron Microscope at 850 x magnification, here in the Wolfson labs at @uclarchaeology . The actual sample is about the size of the dot over an ‘i’ 👁👁 #womeninstem #womeninscience #objectconservation #scanningelectronmicroscopy #cool Image ID: A black and white image of what looks a bit like a rock with lots of pits and bumps, there are some big chunks and some tiny particles all over. The image is on a black background and says “20.0kV 10.1mm x85 BSECOMP”
It’s a double bill #featurefriday this week as we missed last week! First off is the teaching area of the @uclarchaeology MSc Cons lab looking tidier than it possibly ever has... for now! We can’t wait to make it dirty again with more object treatments 🥳#springclean #satisfying #laboratorylife #womeninstem #womeninscience #objectconservation Image ID: A long table with lots of seats is covered with fresh white acid free tissue over plastazote, with a row of boxes of small, medium, and large nitrile gloves at the end. All the shelves and equipment in the lab around the table is very tidy!